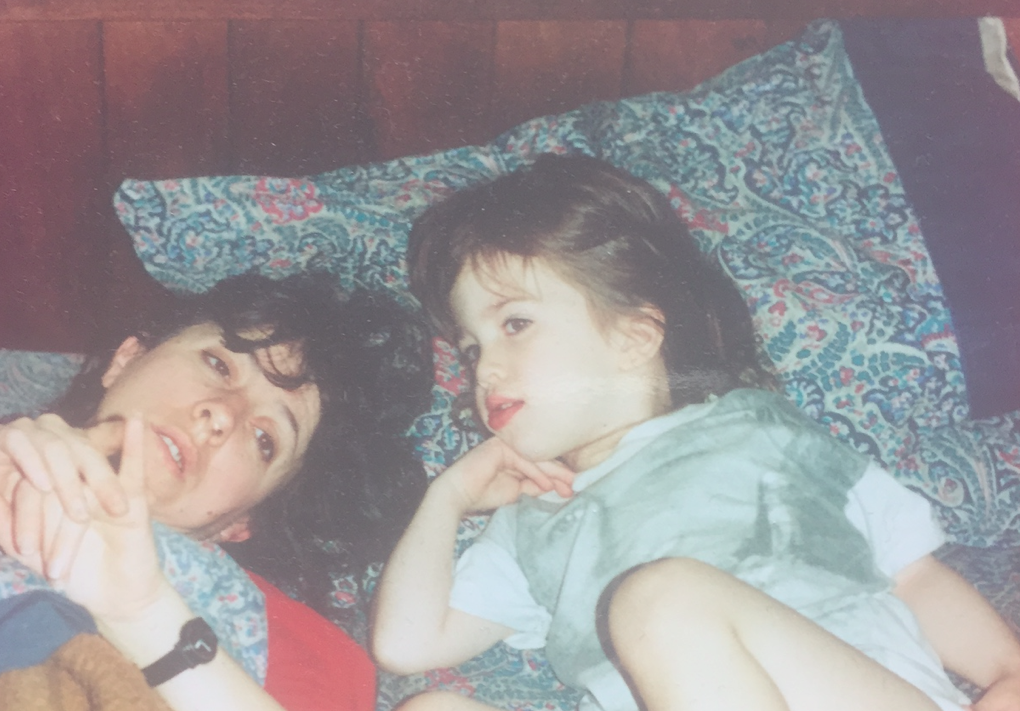 When I was pregnant with my first child I was determined not to get any help from my family. I am used to doing things on my own. My dad is the only relative I have that lives in the same country as me, and my mother died when I was 11-years-old.

When she died, we were living in a small flat in London, paid for by housing benefit. We had emigrated here after my dad had lost his job due to the Argentine economic crisis of the late Nineties. In London, where employment rates were pretty high in 1999, it was much easier for my dad to find a low-paid job. Overnight, we went from being an affluent middle-class family, to buying all our groceries in Netto, and buying less food one week in, order to afford shoes that month. But we were together.

When my mum died suddenly in 2000, it meant my dad had to stop working full-time in order to take care of me. We had even less money, and processing the grief was not a concern in the foreground of my eleven-year-old mind. Instead I focused all my energy on building a better future for myself.

So when years later I was offered a place to study English at Oxford, I knew I was right to believe in my strength. I was going to study my third language at one of the most prestigious universities in the world, and I’d got there without parents who talked through my homework with me, without hiring tutors, having attended a failing comprehensive, growing up as the daughter of an immigrant on benefits, without my mum to cheerlead me. I put off grieving in order to get myself to where I felt I needed to be.

And yet, years later, when I held my newborn baby in those first few days, it suddenly hit me. I had to do this without my mum. It felt impossible. It was the one thing I couldn’t figure out by myself, from books, asking questions, watching videos, no amount of researching and studying motherhood was going to turn me into a mother. I thought a natural instinct would kick in in the hours following the birth, but as much as we bonded, and as much as I loved my son, no amount of feeling elated and complete helped me with the practicalities. All the joy I felt didn’t help me learn how to position him when breastfeeding, or how to burp him without hurting him, or when it might be okay to take him outside, and those around me and all the resources available, each told a different story. I wanted to hear it from my mum, the only person I would trust with such important information, and I wanted someone to be there 24/7, and you can’t demand that of anyone. Except your mum. I felt more like a daughter than I had in years.

But then something shifted. I became a mother. It wasn’t overnight, but it wasn’t exactly gradual either. It was quicker than I expected in those first few lost and chaotic days. And it was permanent.

The thing that hurts so much about death is that it’s permanent. Unlike anything in life, death can’t be undone. You can’t amend your booking or move country when it comes to death. It’s forever. Nothing else feels as eternal as death. Not your marriage, not even the birth of your children. You can still take two hours away from your babies. You can’t take two hours away from a death. You can ignore it but it’s always there.

But it’s not just the pain that is permanent. The joy is too. It might be controversial to speak of the joy of death, but it’s what I have experienced. With permanent sorrow and loss comes permanent freedom and power. Lots of people say they would give anything to have their mother back just for a second, and that when friends complain about their mothers they would give anything to have the same complaints about theirs, if it meant still having a mum to complain about. I disagree. I’m glad I never argue with my mum. I’m glad I never disagree on the big decisions, I never have her tell me how to do something when I think I know better. I’m glad not to have any of the negatives that come with the support and companionship of a present parent. I’m glad to be independent and to feel that sense of power that arises from achieving things on your own terms.

It’s not the same as being glad of a death. I’m not glad that I was traumatised as a young child. But I’m glad she is my mother in that ghostly, invisible way that pulses through me but that never has us bicker, because the loss has taught me something I’m not sure I would ever have learned otherwise.

Even better than having had a wonderful mum, a wonderful childhood, and a wonderful life as an individual, is the act of trying to give that to someone else.  Even greater than anything you’ve been lucky enough to receive, is losing that something and finding out that you’re still able to give it to someone else, without having it for yourself. To know that you can lose love but still give it away is mesmerising. To know that you can feel starved of something and yet be able to regenerate it from nothing, in order for someone else not to feel starved, is what motherhood is.

When you’ve only slept for two hours but you’ll rock your baby to sleep so that they can get some rest, when you’re hungry and exhausted but you make their meal first, you discover that you don’t need something in order to give that something.  You can pour from an empty cup. It may not be ideal, but it’s possible. That knowledge and that power is the greatest gift I could ever ask for, and no, I wouldn’t swap that knowledge in order to have five minutes with my mum telling me I’m doing a great job. Because knowing that you can give when you have nothing left to give means knowing there is always something that no one and nothing can take away from you.

Losing my mum forever means I can never lose her completely, and in turn I know my son will never lose me completely either, and I wouldn’t swap that for anything in the world.

Sofia is 28 and lives in London with her husband Nicholas and their son Francis, aged 1.

She is expecting her second child this September.