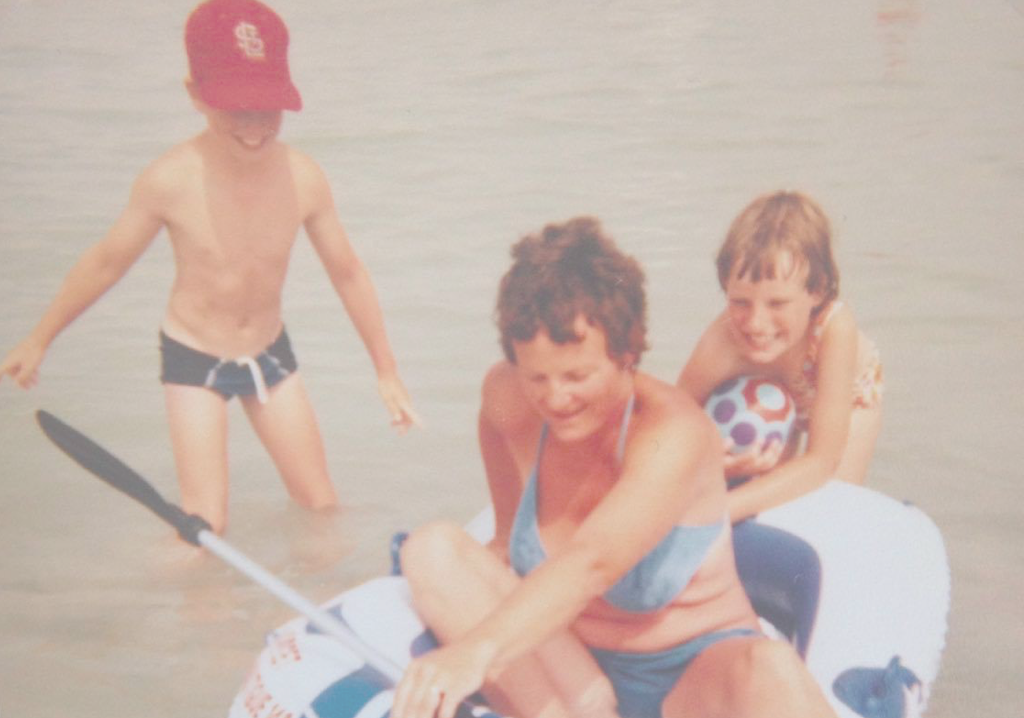 It is now over 13 years since my mum died, and I write this just over a week from what would have been her 70th birthday. Although she died when I was 27, I lost her a long time before that, probably around the age of about 21 when she got her diagnosis – early onset dementia, or Alzheimer’s. As you can imagine the parent child role reversal was pretty swift, and shocking, and something I certainly wasn’t equipped to deal with as a young woman in the middle of university and about to head to London to embark on a career in fashion PR.

My mum got her diagnosis at the age of 50, although she had been showing signs from her late 40’s, we just didn’t realise it. Her deterioration progressed quickly and suddenly I found myself faced with an incapable toddler, a stroppy teenager and a frail old lady all rolled into one. She lost her job, her driving licence and gradually her dignity. It was horrific and now even just hearing the word Alzheimer’s makes me physically shrink. There were no hospital visits, no treatments, very few visitors baring bunches of grapes, just a very angry (and frightened) woman. Her behaviour was irrational and difficult and quite frankly embarrassing at times, especially when out in public, as apart from her slightly dishevelled appearance there were no obvious signs of illness to strangers in the street. I knew no one, and couldn’t find anyone of a similar age to me, going through caring for a parent with Alzheimer’s; only people with grandparents.

As for being a mum to me before the illness kicked in, I am under no illusions that she was the perfect mother. She had very strict parents. A father that measured bath water to make sure she used no more than 2 inches, and a mother whose attention and approval she desperately craved, but never got. She could be very unreasonable and lacked warmth and compassion, although in her defence I think that the Alzheimer’s ate away at her brain slowly over a long period of time – a difficult illness latching onto a difficult personality. I can honestly say we were not close like some mothers and daughters, I could not confide in her, there were no conversations about boys, love and sex (and believe me I could have really done with some advice on this subject) and my older, less strong willed and much more intelligent brother was definitely the blue eyed boy, so I’m not entirely sure that she would have been the doting grandmother I would have liked, doing school pick-ups for me and popping round at a moment’s notice when I got to the end of my tether.

I did however, on the surface have a pretty idyllic childhood. Summers playing in buttercup strewn fields, hours spent cycling round lanes, bottle feeding lambs on the farm opposite our lovely house in the country, albeit not quite so much fun when I became a teenager and was stuck out in the sticks. Family outings and holidays to places like Guernsey and France were a plenty, and I remember lots of fun days playing on the beach. My mum was always there for me when I needed her. She always encouraged what-ever I wanted to do, she was strict but she was protective. When I wanted riding lessons I got them, when I wanted judo lessons (not that I kept that one up for too long) I got them. She was always there when I got home from school, home-made chocolate brownies and flap jacks on tap. She made clothes for my Cindy dolls, and me, and I remember my first sixth form ball where she totally indulged me so I looked and felt like a princess. She made sure I had everything I needed when I left for university and I remember a particularly low point when I was struggling to settle in London she came to stay with me and her concern and love for me was very evident. But, there was a lot of tension and aggression, over the years, mostly inflicted at my very patient and placid dad, and I remember frequently escaping next door to the play with my neighbours and enjoy the calm and loveliness that their household radiated.

I became a mum of three girls in the space of just over two years. It has been tough and there were some very dark moments, especially in the early days. There were, and still are, moments I long for my mum to walk through the door, even just for a short while. When I hear of my friend’s mums coming to stay with them or cooking then Christmas dinner, I have insane moments of jealousy. It’s undeniably hard. I can’t ask my mum about what I was like as a child. I try to imagine her voice saying ‘you were just the same’ when I am dealing with one of my girls hair traumas, or their refusal to speak to through intense shyness which I know I suffered from. Although my mother in law has been a huge support (and is the epitome of the doting grandmother) it is not the same as having my own mum. I was robbed of the chance to become ‘friends’ with my mum, something I am acutely aware of.

I didn’t cry at my mum’s funeral. I’m not sure if I really dealt with her death at the time. I was having fun in London and had just met my future husband so I carried on with life. But there is nothing like becoming a mum without your own mum around to make the loss deeply resonate and force you to face up to it and since becoming a mum to my three daughters, the grief has intensified, not got better, and has at times hit me in the stomach like a wrecking ball.

I do try to talk to the girls about my mum and I have recently had to answer some awkward questions about her death – not easy to explain to inquisitive 6 year olds. I’m sure she would have had plenty to say about my parenting skills, and would have no doubt been fairly critical of my ‘softness’, but I think being a mum without my mum has strengthened my character in many ways – I don’t have her to talk to, nor is she around for any emotional or practical support, so I’ve just had to get on with it. I also deeply cherish and appreciate my friends, old and new, as sometimes they are all I have.

Ultimately I know my Mum would have been proud of me, proud of her granddaughters and her grandsons. Happy 70th mum, I love you.