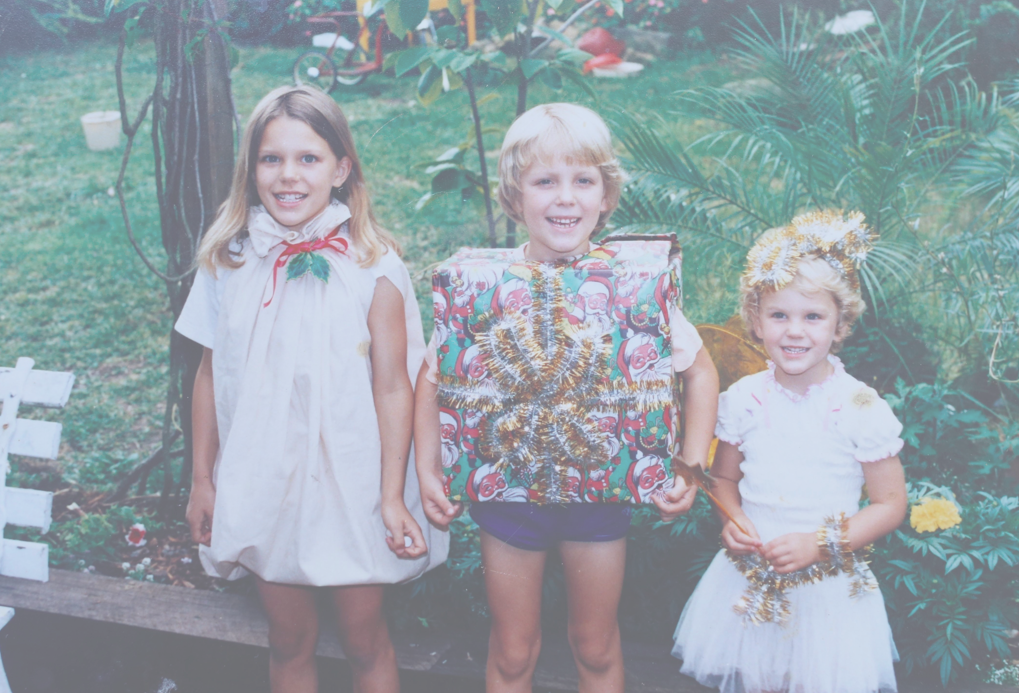 I first heard the term motherless mother when another Mum casually mentioned it to me at a party one day. My daughter was about a year old at the time and I must admit, I don’t think I’d fully articulated what it meant to be a Mum without a Mum, until that very moment. But all of a sudden, there it was. My loss had endowed upon me a heartbreaking title; I was a Motherless Mother.

I was born into your average middle class/leftie/hippie family. Well, average if you consider your parents still wearing flares in the late 80’s normal. My parents valued education, love, natural health and good times (and not necessarily in that order). I was the eldest of three, and we lived a happy life; traipsing through paddocks, riding horses, and trying to solve the never ending challenge of how try sneak junk food into the house without being caught. Dad worked long hours, and so did Mum. But even so, it was Mum who made our lunches, our basketball games, and our two panelled home made board shorts (Ken Done style). She was there for every major event in my childhood, and for most of the minor ones, too. Being the eldest, I was the first to leave home and, as family legend has it, Mum cried the entire six hour trip home after dropping me off at college. I didn’t understand her deep emotion at the time, or why she left a voicemail message on my answering machine every single day of my first two weeks. I was having so much fun I forgot her birthday that year.

I was twenty four years old when Mum gave a toast to the family who had gathered at our place for Christmas dinner. We’d had a particularly rough few years – my Nan had died, followed by my Uncle, and there’d been a stressful end to a longstanding marriage. “Here’s to a better year” Mum said, her voice full of acknowledged pain and hope. It wasn’t many months later that I got a call from Dad. I was having a dinner party with my boyfriend and my best friend in my new flat. Are you sitting down Dad said your Mother has a brain tumour. A day later Mum was flown to Sydney in an air ambulance, and our nightmare began. Weeks were lost in a whirlwind of brain surgery, coma, radiotherapy and hospital visits. We watched on tv as the twin towers fell down in New York and it felt like my own world was coming down around me, too. I lived close to the hospital, and would take Mum freshly steamed broccoli every night after work – knowing how crap she thought the hospital food was. One night I crawled into bed with her like a baby, and we hugged and cried. Mum said the worst thing about it was that after years of having short hair, she’d decided to grow it out.

A year and a bit later, Mum died in our family home, in her bedroom, in basically the only moment that any of us had been absent from her side for the previous few weeks. She’d slowly slipped into a coma, and bit by bit, her breathing slowed until finally there was none left at all. I couldn’t understand why she’d waited to be alone to leave us; it felt like such a cruel blow on top of an already devastating event. It’s the only time in my life that I’ve ever seen a dead body, and I sat with my entire extended family in my Mum and Dads room, all of us crying, as we watched the funeral home people wrap her up, and take her away. It felt like I was watching a movie, watching this happen to someone else’s life. But it was mine. I was twenty six years old and facing life without my Mum.

I’d moved back home for a month to help Dad care for Mum and after she died, I stayed for the funeral and then I just wanted to run away as fast as I could and come back to my life in Sydney. I was heartbroken for Dad, I felt so guilty leaving him; he looked so sad and alone when I left and it broke my heart just to look at him. But everything in the house reminded me of her and I felt this tremendous urge to get away from it. The first few times I went back to visit were extremely emotional – to walk back into the house where Mum had lived, and not have her there was really tough – it cemented the loss I suppose, and I avoided facing up to it for a long time. But after a while, my chest loosened and I began to heal from the sharpness of the grief. Then, out of the darkness, my sister had her first baby. The first grandchild and niece in the family; and she brought with her the most wonderful amount hope and celebration to all of us – particularly for my Dad, who got such healing and joy from that beautiful little being just beginning her life. Like every big life event, there was a huge gaping hole in our family where Mum should have been. It felt extremely sad that she wasn’t there to share in it all with us. I acknowledged the feeling with myself and got on with life. But I could sense that my sister felt something deeper.

A few years after that, I had a baby of my own. When Olive was born, I felt like I’d entered the most incredible, sacred club. The rapturous love and enchantment that I felt in becoming a Mum was so great, and I felt universally bonded to every Mother I met; we were bound together by our deep understanding of ever lasting love. But as my heart opened up with the love, the grief over losing Mum came flooding out again. The great understanding of Mums which came with becoming one myself, and I couldn’t acknowledge it with my own Mum. I so desperately wanted her to be here, to see me as a Mum and to share in the joy and wonder of this amazing new babe. Of course I had expected to feel a level of sadness, but the grief was so raw, so sharp – it was a bit like losing her all over again. The depth of the feeling took me by surprise and some nights, when it felt like Olive and I were the only people awake in the whole world, I found myself sobbing into the silence of the night. My Aunts gave me letters Mum had written them after I was born, where she mused over motherhood, delighted in the things I did – and whinged about me, too! And that helped me to feel a connection to her, as a new Mum navigating through the same unfamiliar emotions and challenges. But it wasn’t the same. And I felt completely and utterly ripped off that she wasn’t here to be a Grandma to my baby and a Mum to me as I Mothered.

A few years later, Clancy was born.  Rapturous love engulfed every part of my being holding my sweet boy for the first time; somehow the love felt even more enormous the second time around. But so too did the devastation of realising that, once again, Mum wasn’t here. I’d given birth to another amazing child that she’d never know. The grief was again so raw, and that took me by surprise. It lasted even longer this time around. If I’m perfectly honest, as things got more chaotic with two kids, the grief over having lost her was mixed in with just wishing she were here to help me. I felt overwhelmingly jealous hearing friends talk about their Mums who would baby sit for them and then, just for good measure, clean their house at the same time.

But, as is griefs way, the sharpness of the pain subsided again. It bubbles up to the surface on odd occasions now, but for the most part I just feel lucky to have had such a incredible woman teach me how to Mother. Sometimes, rather than trying to understand the often cruel mysteries of life, you find peace in acceptance. Even though Mum isn’t here, my relationship with her goes on. She’s still my Mum, I her daughter. And in spite of never meeting them, she’s Grandma to my kids. So I’m raising my kids talking about my Mum; their Grandma Rose. She taught me almost everything I know about mothering, even if she’s not here to share it now.

Kellie lives in Sydney, Australia, with her husband and two children and can be found here @dearolive.