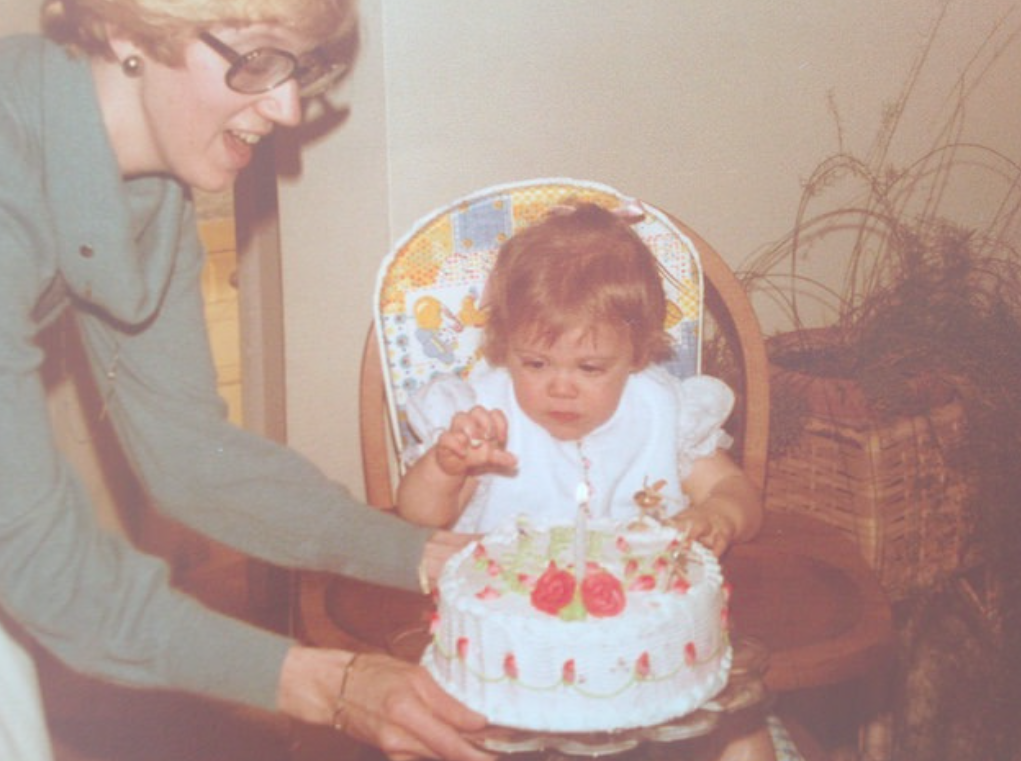 The year of birth and death: that is what I call the year I lost my mom. I gave birth to my first child and eight months later my mom died. My daughter is now three years old and while I’m still a relative newbie with this grief stuff, I’ve learned a few things along the way. Firstly, a depressing post-storm beach does not make for an ideal backdrop to honour your loved one on the anniversary of their passing. Secondly, ordering take-out Chinese food on Christmas Eve is in fact a perfectly fine way to honour your loved one during the holidays, because recreating every dish you can recollect your mother making since the early 1980s is neither sane nor realistic. And thirdly, grief is never chosen, but it can give you gifts, if you choose to find them.

I got the The Phone Call in August of 2013. My mom had recently been in the hospital and my dad was calling with what I thought would be a routine update. I was immediately taken aback by the shake in his voice. The doctors had found tumours in my mother’s throat. The words “hospice care” were thrown around. As upsetting as his call was, it wasn’t entirely unexpected. My mom was at the end of a long battle with cancer. Nearly two decades earlier, when I was a teenager, she was diagnosed with stage four breast cancer. My mom endured aggressive treatment that saved her life, but it ultimately caused brain damage that impacted her personality, behaviour and cost her most of her mobility. Up until this point she had been stable but frail.

I knew immediately that I wanted to join my sister and dad in helping to care for my mom. I put some freelance work on hold and two days later was on a flight home, my seven-month old daughter in tow. While I never expected to be tending to my dying mother in between changing diapers and nursing my daughter, I am grateful that I was able to be at her side in those final weeks. The experience was both heartbreaking and beautiful. My aunts, who visited nearly daily to help care for my mom, cooed over my daughter, spoiling her with toys and kisses. My cousin, a former hospice nurse, gently guided us through the process and put us all at ease. We brought my daughter to my mother’s bed and sang songs to the both of them. One of the last memories I have of my mother while she was still lucid is her grinning ear-to-ear at the sight of her chubby granddaughter, who in return smiled just as big.

The first year without my mom was a blur. Grief left me tapped out. All my energy went toward caring for my young daughter and there wasn’t much left for self-care. (Let’s be real: even without grief there is little time for self-care during early parenthood.) As months went on and my daughter started reaching more milestones – learning to walk, celebrating her first birthday – I felt pangs of regret for not having asked my mom more about my own childhood. Did I scale walls and bookshelves like my own ninja-child did? Did I experience teething-pain-to-end-all-teething pain? (And dear God, if I did, when did it end?!) When out shopping, I became resentful of fellow moms I saw with their own mothers. I bitterly envisioned these mother-daughter duos returning home, laughing as they forged multi-generational memories and baked cookies.

And then there were the holidays and anniversaries. To say that I had difficulties navigating these minefields would be an understatement. First there was the incident on the anniversary of my mother’s death. I took the day off from work and since I am fortunate to live near a beach I decided to spend my day beach combing. I imagined the day going something like this: I would silently walk the beach, collecting shells that would carry meaning for me for years to come, as I transcended loss and found meaning in it all.

The day did not quite live up these (ridiculous) expectations though. I arrived that day to find a post-storm beach smelling of stinking, rotting shells and bugs. I returned home disappointed and covered in bug bites and made a vow to spend future anniversaries on the couch, watching Gilmore Girls reruns and eating ice-cream.

Then, take Christmas. A rational person might choose to prepare one special dish that reminds them of their loved one. Not me. I planned to make ALL the dishes. And I mean all. I schlepped home ten bags of groceries and then promptly had a meltdown on the kitchen floor when I realized it wasn’t happening. Not with a toddler and Christmas guests and bags of yet-to-be-wrapped Christmas gifts. We ordered take-out Chinese food for Christmas Eve.

But these disasters aside, after two years without my mom I finally felt as though the grief might be lifting. I had another reason to be joyful as well: I found out I was pregnant with our second child. I was elated. I got goosebumps when I realized my due date was the date of my mother’s death. It seemed like this unborn child already had a special connection to my mom.

My joy shifted to unease when I started to have bleeding and spotting early in the pregnancy. I felt a sudden malaise. Something wasn’t right. My first visit with the midwife confirmed my fears: my baby had stopped developing at seven weeks.

I was devastated. I suddenly found myself back in grief-land. I hated grief-land. To say I was tired of being in grief-land was an understatement. I was like that guy who was stuck living in an airport for years on end. I wanted out and yet it seemed there was no way out. I thought that my pregnancy was going to bring joy and hope after the pain of the previous two years, and here I was facing more even more loss.

You know the saying that if you are at the end of your rope you need more rope? Well I finally decided I needed more rope. I was tired of navigating grief alone. I had recently started blogging regularly and I turned to my writing to process this latest grief. As vulnerable as it felt, I started sharing my writing with close friends. They in turn reached out and checked in on me. One dear friend sent me a small statue of Jizo Bodhisattva, revered in Japan as a protector of pregnant women, pregnancies lost to miscarriage and to children who have died. I wept, so touched by her kind gesture.

But it was a conversation with my sister that gave me a final a-ha moment. She saw my suffering and was concerned. She gently reminded me that my mom would want me to be happy and unburdened by grief. I knew she was right. I realised as much as I was a victim of circumstance, it was up to me to decide how the story would end.

I started to look for the blessings in my loss. I made plans to visit my maternal family, to share memories and hugs with my aunts who had cared so tenderly for both my mom and my daughter. And while I’ve long been someone who is leery of organised religion, I found a progressive, loving faith community that immediately embraced me. I was forging new community and it felt so good.

Remember the guy stuck in the airport for years on end? He eventually got out. I’m happy to report that I too no longer feel stuck in the airport of grief. I continue to write regularly, my Jizo statue watching over me, reminding me that I have friends only a text or call away. I recently celebrated Easter and proudly only cooked one of my mother’s special recipes. (Score one for no holiday meltdowns.) And as far as future anniversaries are concerned, I plan to avoid long, quiet walks on the beach. Why go alone when I can have family by my side?

Sarah lives in Fort Myers, Florida, USA with her husband and daughter aged 3.